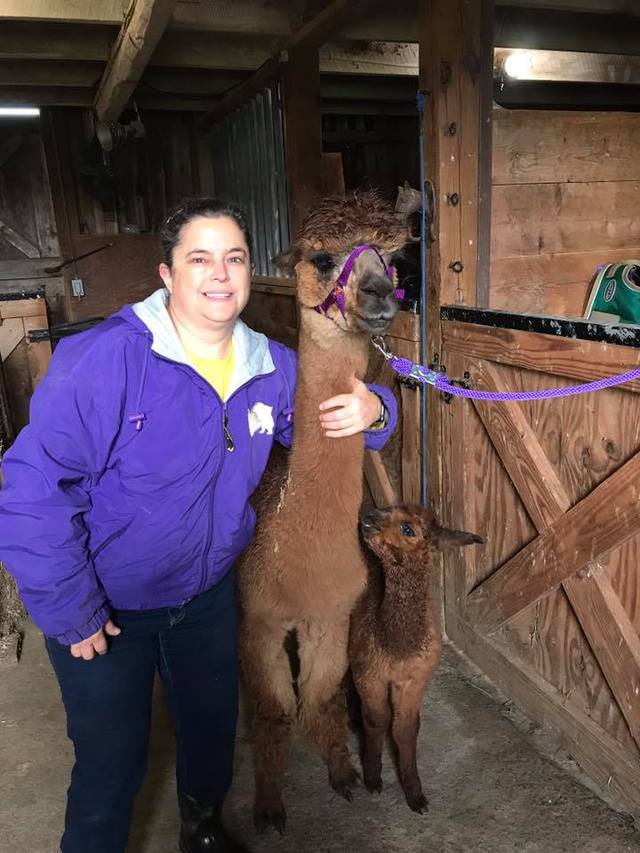 New Groove Alpacas is a small Huacaya and Suri alpaca farm in Middletown Delaware about 25 miles south of Wilmington DE.  In December of 2016 I started thinking about becoming part of the wonderful world of Alpacas.  I got online and searched for local farms knowing absolutely nothing and after our first visit I was sure that this was something I wanted to do.  It became apparent rather quickly that it was not going to be easy to realize the dream…for starters my home was on 2 acres (not nearly enough space) and also not zoned for livestock so the biggest hurdle was the horror that comes with selling and moving houses.  I kept visiting farms (I think I stopped counting at a dozen), attending seminars and alpaca shows and just generally educating myself as best I could. December 2017 I was finally ready to start getting serious.  The house went on the market (and stayed there for 6 months….ergo the reference to the horror of selling a house) and in the meantime the search for new premises was on.  Six months and two failed contingency contracts later, the farm that is the new home to New Groove Alpacas came on the market and things all finally fell into place.  Settlement and moving was in the hottest part of July 2018 (something I was trying to avoid but didn’t quite manage). August was spent prepping the farm for animals.  In it’s past life the property was home to a Standardbred racing stable and after that to pleasure and 4H horses.  The sellers however had no animals on the farm for the three years they were there and the animal facilities were somewhat neglected.  Not only was there a boatload of cleanup but the old horse post and rail with electric wire fencing had to all be removed to make way for alpaca appropriate fencing.  In the Spring of 2018, I selected a wonderful Mentor farm and purchased several animals from them and the dream has become reality.  My first cria (Emperor Kuzco) was delivered to mom Truffles at his home farm on October 3rd 2018.  Several days after that our first animals arrived (Demi and Mariela) and a week after that Kuzco was ready to make the move with his momma to join them.  In October of 2018 we added 3 Suri females to the mix. As we celebrated our 4th anniversary in July 2022 we count 19 of our own Huacaya and Suri alpacas (including 3 huacayas born on the farm in Spring 2021 and our first Suri cria born in July of 2022), a llama, and 7 guest alpacas.  We look forward to many years of having these beauties as the foundation of our farm.